I literally don’t even know what to write about what I just spied a while ago.

The internet is going berserk with people blasting the costumes which are, to be frank… astoundingly ugly.

Saucy was actually pretty kind in her review and made some good points – that IP is trying to go out of the box, as they have done in recent years. And that many revellers complain about the samey-saminess of costumes and the lack of artistry but when someone goes out of the box and tries to depict a very different theme, folks don’t like it.

“However it has been proven time and time again that bikini and beads masqueraders as MUCH as they bemoan the fact that they want something “new”, something “unique”, when they are presented with costumes that are different will always go back to “feathers and bling”. That is what they love, that is what sells.”

I take her point and certainly IP has gone waaaay out of the box with these designs and I see how they are actually trying to depict a theme with the super-hero capes on Kalypso, Wild Heart and Oya and the masks on Wild Heart and Siren. They get points for effort and intent.

But… BUT! You can depict a real theme without it being ugly. As we pointed out years ago, Tribe’s 2007 presentation ‘Old Time Someting Come Back Again’ was a good example of a real theme and artistry that was also appealing and beautiful.

IP just failed with the execution of this one. The colour combinations were especially awful with the section in the photo above – Nocturnal, being probably the worst with this inter-galactic bumble bee look.

Lots of folks should be happy that Rihanna made it home for Crop-Over for the first time in years.

Rihanna herself of course – she do bad pun de road with Baje International, 6:30-ing, jonesing and of course wukking up stink.

The local photographers and videographers should be happy as clams, as their pics and vids of Rihanna’s antics clearly sold well.

Baje International should be pleased as anything – they really stepped back up their game this year with hot parties and hotter costumes and topped it off by getting Rihanna on their truck.

But the Barbados Tourism Authority should be happiest of all because the international press can’t get enough!

Pics and video of Rihanna in the bright red and gold ‘Firefly’  frontline costume atop the Baje truck with a Barbados flag in her hand are everywhere – E! Online, MTV, Fox News, HuffPo, NY Daily News, Daily Mail, the Times of India are just some of the media sources covering it.

The coverage is pure marketing gold. The Philadelphia Inquirer said:

“Rihanna, 23, lit up her native Barbados like a Christmas tree Monday in a skimpy red bikini ‘n’ fishnet stockings outfit, capped by an explosion of neon-red feathers on her pate.”

“Sporting a jewel-encrusted bikini, fishnets, elaborate red garter belts and plenty of flashy jewelry, Rihanna, who serves as an official tourism ambassador for Barbados, danced on a float and with members of the crowd.”

And in an article that has garnered 525 comments already, the Daily Mail stated that:

“Rihanna was dressed in a louder than life attire as she took part in a traditional Bajan festival. The singer climbed aboard a float dressed in a cutaway bra top and a pair of tiny red pants flaunting her fabulous figure as she celebrated Kadooment Day.”

Crop-Over is coming islandistas and despite being in hibernation for the last few months (between my wedding in December and now expecting my first child I’ve been ex-hausted!), that is enough to bring the Islandista out of her cyber-cave!

So Power x Four is both the old and new of this post – pics of their 2011 costumes have popped up on Trinidad Carnival Diary but… it’s a rehash of last year – Bajan Reef Pt II no less! Booo, hisss!

I guess you can say they prepped us by calling last year’s presentation Bajan Reef Pt I but come onnn. It’s not as if this is some great, conceptual costume story that needs to be told over the course of two years – it is pretty-colour FISH dammit!

It feels lazy from Power X Four and though they have been my preferred band for jumping for the vast majority of years I’ve jumped Crop-Over, I gotta call it as I see it. It smacks of what they did in their 10th anniversary year in 2004 when they recreated costumes from their previous years.

That said, the costumes are pretty  – Px4 is always consistent in its quality and beauty. We especially like Night Octopus and Queen Conch.

Now for the NEW new! A certain Crop-Over band is recreating its image and is coming out fresh in 2011 as Fantasy and the costumes we’ve seen thus far are gorgeous! They are really going to make a stir on the scene for this Crop-Over and give Baje, Px4 and Contact a run for their money. Check out some of our faves from Fantasy below.

So what do you think, islandistas? Getting excited yet?

So this is the story that finally brought Islandista out of her hibernation (more on that anon) – uber-islandista Rihanna is on the cover of the April issue of Vogue magazine!!! 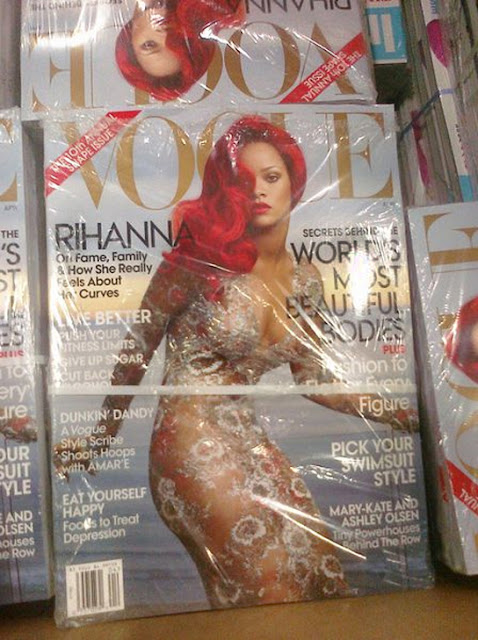 She’s covering Vogue’s annual Shape issue which is frequently a lightning rod for controversy and criticism.

We’re loving how the shot is channeling cartoon vamp Jessica Rabbit, not to mention Ariel from Little Mermaid -a great pop culture reference for one of the world’s biggest pop stars.

Ri-ri had accidentally leaked news of the cover shoot some months ago, excitedly tweeting (and promptly deleting):

Not much more we can add to our headline, which just about sums it all up. Ri-ri turned in possibly her best live performance (certainly her best awards performance) ever, opening the American Music Awards last night.

Killed. It. DEAD! She was on fire! Check out the vid and let us know if you agree.

Well, well, well looka this though!

In the wake of the devastation left in Barbados, St. Vincent but especially St. Lucia by Hurricane Tomas, this was the first thingTrinidad’s Prime Minister Kamla Persad-Bissessar had to say on Monday:

“We will have to look at ways in which we would be able to assist. But you would recall my comments earlier this year, when I said there must some way in which Trinidad and Tobago would also benefit. So if we are giving assistance with housing for example, and that is one of the areas that we (Prime Minister of St Vincent and myself ) spoke about, … then we may be able to use Trinidad and Tobago builders and companies, so that whatever money or assistance is given, redounds back in some measure to the people of Trinidad and Tobago.”

Naturally, her comments are causing outrage up and down the Caribbean.

Many are saying while they understand and don’t even object to the sentiment behind it (aid with conditions is nothing new after all – look every stadium or office block the Chinese build in the region is done by Chinese companies and with Chinese workers to boot) but the way she said it and when she said were completely out of order.

And we here at Islandista agree, though we are not surprised, because Kamla has made her anti-CARICOM stance very clear in a set of mouthings for much of this year-  starting with infamous “ATM” comment earlier this year and continuing with her kvetching about the expense of the CCJ being based in Trinidad – after HER PARTY, the UNC lobbied for it to be there in the 90s.

Her comments are crass, short-sighted and disgracefully unCaribbean for a woman who lived in Jamaica for 14 years and drew a salary from the Jamaican people for at least 10 of those years.

Not only that, they are flat out stupid. “Some way in which Trinidad must benefit?” As the Express rightly pointed out in its editorial today, CARICOM countries “take about 10 per cent of Trinidad’s exports.” Trinidad, more than any other CARICOM country, has been benefiting for years from intra-regional trade.

What if the citizenry of these countries were so offended that they decided to take the aid but boycott Trinidad’s goods?

Simply put, words mean something and Kamla should have chosen her words more carefully before biting one of the hands that feeds her people.

As excitement builds for islandista Nicki Minaj’s debut album Pink Friday, she’s dropped a video for one of the tracks off the album – another relationship number that is almost the flipside to the ‘so in love’ vibe of Your Love Right Thru Me.

Islandista
Create a free website or blog at WordPress.com.